The destinature Dorf Südeifel is located in a particularly beautiful corner of Germany and has several borders nearby: Luxembourg, France and Belgium can be reached quickly. In our holiday camp you can relax and have a good time alone, as a couple, with friends or with your family. But there is also a lot to discover around the destinature Dorf. Here we present some excursion destinations.

The village of Ernzen, on the edge of which the destinature Dorf is located, is a tranquil village, characterized by its small church and the small streets with farms. It is embedded in a gently rolling landscape. There is a restaurant on site. A detour to Irrel or Echternach is worthwhile for shopping and other restaurants.

Near the destinature Dorf, about 2 km away, you’ll find the Teufelsschlucht dinosaur park. Here, young and old fans of primeval lizards can go on a journey through the history of the earth. The large theme and adventure park in the immediate vicinity of the Teufelsschlucht presents over 160 life-size reconstructions of mostly extinct species from more than 600 million years on its extensive grounds interspersed with rocks. It also offers insights into current scientific research with the “PaleoLab”.

Grown-up and small dinosaur fans go on a journey through the history of the earth – from the first land creatures to modern humans. The life-size models of animals and people are designed according to the current state of scientific research. And of course the gigantic Allosaurus and Stegosaurus, Triceratops and Velociraptor and the fearsome Tyrannosaurus Rex stand out in particular. 45 meters long and more than 8 meters high, the Seismosaurus, the “earthquake lizard”, surpasses all others in size; the model of this giant is the largest dinosaur model in Europe. In the park area “The Future is Wild”, creatures imagined by scientists take visitors into the future.

Directly behind the destinature Dorf, just a few steps down and up you’ll find a landmark of Ernzen – the Felsenweiher (a rock pond). Originally built by villagers in the 1830s as a pond for fish farming, it is now primarily a tourist attraction. It is integrated into the rock and bears features of garden architecture with its steps and the fountain.

The destinature Dorf Südeifel is located on the Ferschweiler Plateau. This plateau is characterized by bizarre rock formations. Narrow gorges and narrow crevices, huge rock towers, mighty blocks of stone with bizarre weathering shapes characterize the landscape. During the Ice Age, a large block of sandstone tipped over and opened a 28 meter deep crevice, the Teufelsschlucht. This fascinating natural monument can be reached in an about 2.5 km walk from our camp.

In our holiday camp you are surrounded by nature, because it is located in the Südeifel nature park, the second oldest nature park in Germany. Here you will find a number of hiking and cycling trails. Further information on this can be found on the Südeifel Nature Park website.

Stay up to date 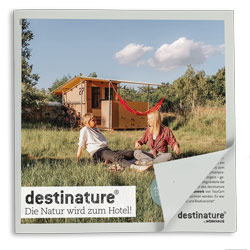